Years from now, I’ll remember today with quiet and heartfelt thanks. I learned something I never expected in starkly beautiful Kansas.

Yesterday was a perfect day. At about 10am, I crossed into Kansas, which more than any other milestone before, truly blew my mind. This is faaaar, and somewhere herein lay the journey’s halfway point, though exactly where depends on how I count and how far I ultimately go. The temperature was high, 101°F with a heat index that says it felt like 121°F, which I don’t contest. Towns were spaced perfectly for me to stop and drink something big and cold every 1-2 hours. I spent the supposedly hottest part of the day in a local library and eating lunch, but even when I emerged from that at 3:30pm, it was still over 100°F. By the time I was in the next town over at 6:45pm, it was still 95°F, and I still had 20 miles to go to camp, with an 8:45pm sunset to race. I crushed it, and after an 87-mile day in that heat, I arrived in plenty of time to set up camp and enjoy the lake view before dark. The stars were vividly clear and the air was full of fireflies. I left the rain fly off my tent so that it was simply a bug net, and I fell asleep looking up at the Milky Way, seeing it clearly for perhaps only the 5th time in my life. It was a perfect day because it was hard and I did well, but most importantly, everything lined up.

I’ve spent months dreading this state for its emptiness and its famous winds. Even historic issues of the famed Providence Scrabble Club Newsletter will attest that months ago I was most concerned about Kansas. Now just shy of 2,000 miles peddled since Boston, I’m here and the moment is now.

This morning at first light, I woke up on the wooden bench in the shower house. At 3am, I was damn-near convinced that there was a bear trapsing around in the woods next to my tent, and though I knew that wasn’t probable, I really didn’t care about statistics at the time. It turns out there are no bears or mountain lions in Kansas, and later evidence suggests that the squirrels in the treetops can be large, slow, and noisey. So, ha!, you got me good.

Today’s ride was supposed to be a given: 75-mile bike path, probably rough, but shaded and protected from the wind, protected from trucks, headed directly west, and with well-spaced towns for food and water. But at just seven miles in, I got a flat tire. The bike path was a lot rougher than I had expected, and the cause of the flat was immediately obvious. My 3-day-old new tires were studded with thorns.
Just as I had picked out the first few thorns with tweezers, a golf-cart-type vehicle drove up and stopped. That’s rare, I later found out—the remote path just opened last year, and maybe only a handful of people use it per week, and these guys were there to investigate reports that someone was digging holes in the path. The exchange was fast, something like:

“Thorns? That just happened to a guy last week. The trail is rough here. I’ll tell you what, Dan here will drive me to my truck, and I’ll come back and take you into town. Is that okay?” [Note, esp. regarding my last post: Dale drives a pick-up truck, as do many many good people, so of course they’re not all bad!]

Now recall my last flat tire incident where I said no to help four times, and I ended up having to ride that flat tire 26 miles. And it wasn’t 100°+ then. So I said yes very quickly. GG in Illinois will recall that I really didn’t want to be driven anywhere if I could help it because it was “against the rules.” Saying that today seemed even stupider, so I said thank you very much, and Dale took a break in his day to drive me the ten-or-so miles into Osage City. Even at the time I wrestled a bit with the idea that this would be my first caveat to the whole coast-to-coast-only-by-bike claim. But of course that was the right thing to do. This was a life safety issue, and I had no way to know whether I could fix so much damage on my own.

Dale had me choose my destination. There were no bike shops, so I chose the hardware store. He walked in, told them I was there, and left me with the assurance that his wife also worked next door, so I could contact him through her if I needed anything else.

I met Mary Sue, who with her husband Willie, owns and runs Osage Hardware in Osage City. I spent more than an hour there picking out thorns from both tires, while using their covered outdoor area for shade. Mary Sue gave me a bottle of Gatorade and tried to convince me more than once to come inside to cool off to do my work, but I really didn’t want to intrude further, and I knew she could tell that. I picked out all the thorns I could find—many dozens—then reinstalled both tires. Though they seemed to hold air, it would still be a gamble to get to the nearest bike shop 35 miles away.

When I was ready to go, Mary Sue insisted on feeding me lunch, I think to help give me energy just as much as to give me time to rethink my plans. Willie offered to drive me the 35 miles himself, and probably just plain knowing how stubborn I must be to get even that far, he followed up with the offer: okay, go ahead and try yourself, and here is my card, call me at anytime if you have trouble and I’ll come get you myself. “I really don’t mind.” He gave me plenty of local advice on which routes to take going west after. Then, finally, after acknowledging that my adventure is hugely respectable, he offered: “Though really I’d prefer if you just took a plane to San Francisco.” I hugged them both good bye and I headed off. 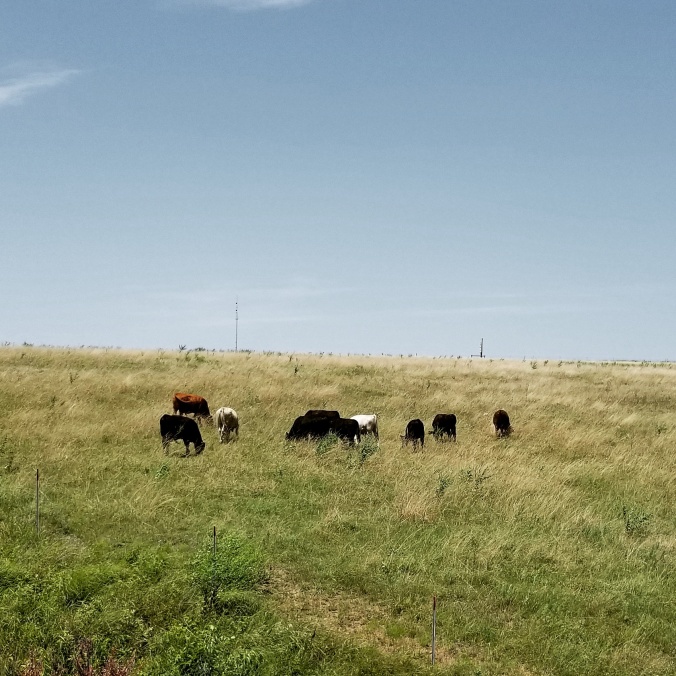 That 35 miles, though, was simply brutal. The tires made it, and I made it, but it felt like only barely. The actual temperature today was 109°F, and I had 20-30mph headwinds the entire way. My left knee, which until now was doing splendidly, was strained with the wind. I nearly ran out of water, and I was already rationing it at 15 miles out. Even that would have been worse had not Mary Sue given me that Gatorade bottle, my fifth bottle, that I refilled and kept. And once again on a nearly-empty road, an angry pick-up truck driver decided to express his thoughts about my existence, this time by “coal rolling” me, or clouding me with black soot from his illegally-modidied exhaust pipe as he passed.

Last week and this week are supposed to be the hottest of the year here, and the only break, down to the high 80’s, will come on Sunday with days of thunder storms. There are no trees, few towns, the heat hurts, and quite frankly this part isn’t remotely fun. It’s clearly dangerous here too. No one should be riding a bike across Kansas right now, and hubris is what gets people hurt. 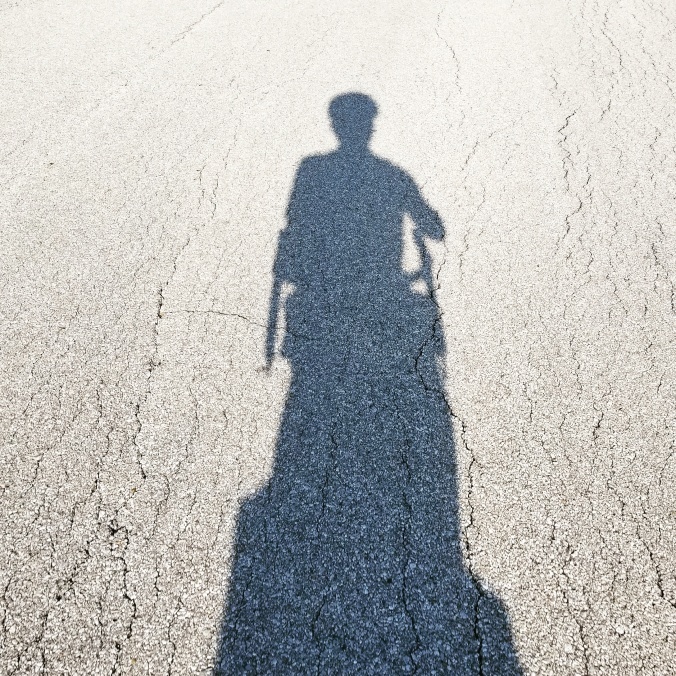 So this is perhaps my greatest lesson from my journey so far: I should seek peace in failure. (Thank you, Dustin, especially, for your comments on my last post.) It is the unambiguously wise thing for me to do to skip Western Kansas. It means I’m going to “break the rules,” so to speak, but seriously only I ever imposed that, and it’s purpose is to motivate me not endanger my life. So “failure” more properly needs a reference frame.

As a designer and educator, I know that any design project should be judged chiefly by the project’s own goals. My project, I said, is to have a “challenging and hopefully inspiring” journey. And on that, already, just halfway through, check. And here I was used to thinking of days like yesterday as “perfect” days because I achieved a lot of miles in good conditions. Wrong again. Based on my premise, today was the best day so far at just 45 miles. It was certainly challenging, and the true kindness of strangers is awe-inspiring. Thank you Dale, Mary Sue, and Willie.

Thanks also for those thorns. Were it not for the flat tire, I would have lost any good option to stop after today.

“Make Plan B Better Than Plan A”

Tomorrow I’ll take a Greyhound to Wichita to rent a car, come back to Emporia, KS to pick up my bike, then head off in some indeterminate direction to explore this part of the world for a week, mostly off the grid, partly on bike. I’ve been to 43 states, but that list doesn’t yet include Oklahoma or New Mexico, and I’ll fix that.

I’ll head to Denver next weekend to visit friends and family, then leave my bike there for a few-days’ round trip to Toronto for a professional conference where I’ll co-teach a lab with my friend Daniel. He was very insistent that I figure out how to get there in the midst of my trip, and I realy didn’t know how I could until recently. (That, and Daniel has a way of moving mountains to make the right thing happen too, so thank you.) Besides the fact that I’m very much looking forward to seeing friends in Toronto, it’s both a nice way to honor my former work with Safdie Architects while dipping my toes back in the waters of the professional world before I’ll be a fulltime member again soon enough.

Back to Denver by the second week of August, I’ll get back on my bike, with four weeks to play wherever I want, free now from the shackles of “the rules.” So I saved the best for last: the Rockies!

3 thoughts on “Remember the Goal”